Bang was a middleweight robot built by Team Bang from Alberta, Canada, which competed in Season 3.0 of BattleBots. It was a black box-shaped robot armed with a custom four-toothed blade on the front and a long thwacking tail on the rear, tipped with a short length of chain and a pickaxe. Bang was originally planned to be a four-wheel drive robot, but this was abandoned as the builder chose to switch to a direct-driven system for the final robot. Bang's secondary weapon, the thwacking tail, was inspired by the tail of a stingray as well as the Screamers from the film of the same name.

Bang's only fight was with Village Idiot. Although no footage of this fight has been made public, apparently the first ram by Village Idiot caused the bolts that held Bang together to come loose and the angle brackets bent, and after a second ram the chassis bending caused Bang to have serious driving issues as its wheels barely touched the ground. In the end, Village Idiot won by KO, and Bang was retired after this fight.

The builder had planned to return with a lightweight robot in Season 4.0, possibly called "Slash" but the parts never arrived and the robot was never completed. 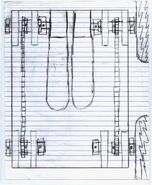 A sketch of the original four-wheel drive layout for Bang, unused

A sketch of the final two-wheel drive layout for Bang, showing the vertical disc and thwack tail
Add a photo to this gallery
Retrieved from "https://ultimate-robot-archive.fandom.com/wiki/Bang_(Middleweight)?oldid=15119"
Community content is available under CC-BY-SA unless otherwise noted.